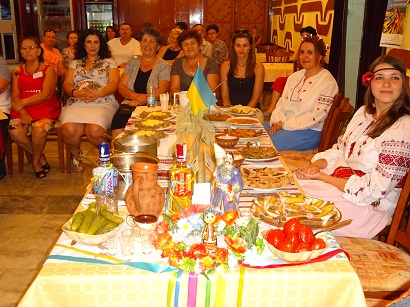 The International Culinary Exhibition "The Black Sea Tastes" in Burgas was the first of its type and turned out to be a real celebration of the senses with an idea to become a tradition. 28 amateur cooks from Greece, Ukraine and Bulgaria not only prepared their best tasting homemade dishes but shared recipes and exchanged experience. The event was held at the restaurant of the Professional High School "Prof. Asen Zlatarov", Burgas. It is organized within the project "Black Sea Areal for Culture and Art" (BASACA), funded by the Black Sea Basin Joint Operational Programme 2007- 2013. The project partners are Municipality of Komotini - Greece, Association "Platform AGORA - branch Burgas" and Agency for Support of Cultural Initiatives "KusiCreaVision" - Ukraine.

The whole day at the culinary workshop the cooks from Greece, Ukraine and Bulgaria demonstrated how one can prepare Black Sea dishes from the traditional cuisine of each of the participating countries. The Jury, including the teachers Panayot Tcvetkov and Rosen Yanakiev and a representative of the project management - Rayna Milanova tasted each of the prepared dishes and graded them "Excellent". The team from Greece got "The Richest Tastes of the Black Sea Region" award. The Ukrainian cooking team was awarded with "The Best Combination of Vegetarian and Meat Dishes". The Bulgarian team was awarded "The Best Combination of Tastes from Strandja and the Black Sea". All participants received a special certificate.

The fans of good food learnt a lot of hints used by our grandmothers when they set the table for each celebration or holiday season. The plentiful of food there could have tempted even the ones observing the strictest diet. The participants have arranged the best of their three countries' traditional cuisine. The hosts from Bulgaria prepared fish dishes for celebrating St. Nikola's day (December 06th), 'banitca' with groat from Strandja, mussels with rice, handmade round bread Malko Tarnovo style, baked beans and many other delicacies. From Ukraine there was also fish, borsh, 'kompot', homemade vodka, traditional 'black' bread with 'slanina', pickles and many more. The Greek recipes were the most sophisticated ones according to the Jury. However, we noticed many similar methods with the Bulgaria cuisine. On the table, there was even pork with cabbage Topolovgrad style, and the recipe of one participant was heritage of her grandmother who was Bulgarian. The youngest among the Greek participants - Maria presented very interesting recipe for her 'round bread', that she had named Fanurieva". „This 'round bread' is made for the celebration of St. Fanuryi". If you have lost your key or your husband, make that 'round bread' and they will appear immediately. As for the recipe - I put some flour, raisins and ... the rest is my secret", said Maria and got applause from all guests and participants in the culinary exhibition.

The culinary show is part of the cultural events held within the project "Black Sea Areal for Culture and Art" in Burgas in the period August 27th - September 05th, 2015. Its goal is cultural exchange between the three countries, update and enhancement of the cultural life in the region of the Black Sea Basin.

The International Creative Art Workshop "Black Sea Palette" is held in Burgas, too. At selected locations in Burgas region the artists will depict and transfer to canvas the local sights and residents. Their paintings will be arranged in an exhibition at Bulgaria Hotel on September 05, 2015.
The third event to be held within the project is a creative workshop where 50 children will make jewelry and souvenirs from natural sea materials on the theme "Wonders from the Sea". The children's creative objects will be on display during the artists' exhibition.

For more information and to contact the organizers: +359 878 80 70 31.
The project is co-financed by the European Neighborhood and Partnership Instrument (ENPI) of the EU.

The festival Season has Started